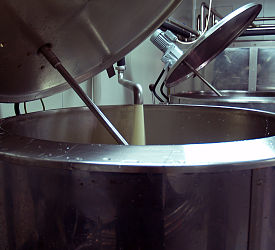 Yoghurt was traditional food for Bulgarians for thousands of years. The discovery of this original nutritive product belongs to Thracian tribes, inhabited the lands of Bulgaria.

Proto-Bulgarians inherit from Thracians the habit to eat milk, which has turned sour by itself. Specific role for the forming of the micro-flora plays also the sheep milk, basic food of Thracian tribes. The sheep milk is considered a basic factor for the forming and strengthening of Bulgarian yoghurt as specific lactic acid product.

When in 1905 the Bulgarian Stamen Grigorov discovered the micro-flora of Bulgarian yoghourt, there were started the scientific research and the search for possibilities for industrial production.

At first the yoghourt was obtained through boiling of the milk in cauldrons, after which it was cooled, treated with starters and poured into 5l aluminium basins and 1l glass jars.

The beginning of the industrial production was in 1960 in dairy processing plant “Serdica” – Sofia, by introducing mechanized pasteurization of milk but the utilization of aluminium basins remains. In 1966-1967 in “Serdica” there was constructed a new workshop for yoghurt production. Machines for automatic filling of the yoghourt into glass jars and sealing with aluminium foil were imported from England.

The industrial production of yoghourt was introduced also in the other dairy processing plants in the country but the products differs itself to some extent from the one prepared in domestic conditions. The basic faults represent a taste sharper than desired, grainier structure and more expressed synaeresis. Besides the desired proportion between Lactobacillus bulgaricus and Streptococcus thermophilus is broken quickly.

The yoghourt produced under this technology with the original Bulgarian starter cultures has a typical taste and fragrance, homogenous structure and dense consistency. The technology and the starters quickly find their application in all dairy processing plants of the country, where they have been used to date.