History of the Bulgarian Yoghurt 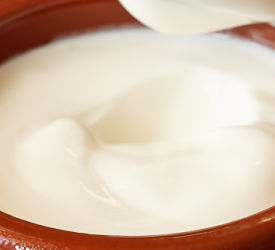 In the beginning of the 20th century the famous Russian scientist, winner of the Nobel Prize, Ilya Mechnikov (1845-1916), working at Pasteur Institute – Paris, began researches on the causes of human aging. He found that during feeding the protein substances in food are degraded by the action of putrefactive intestine bacteria that cause poisoning of the body and early death. He proves that the only food that could restrict the development of putrefactive bacteria in the intestines is the Bulgarian yoghurt, by which is explained the largest number of healthy centenarians in Bulgaria.

At the time of the biological research of Ilya Mechnikov, the Bulgarian doctor, Mr. Stamen Grigorov, a student of medicine in his fourth academic year at the Geneva University, undertook a research on the Bulgarian yogurt and found that the cause of fermentation is due to one rod-line and one spherical bacteria. Notice of his discovery was published in “Revue Medicale De La Suisse Romande” issue 10 dated 20.10.1905, Genève.

Promotion of the Bulgarian yoghurt in other European countries began after the recovery of the French King Francis 1 (1515 – 1547) who had suffered a stomach disease. A Jewish doctor was called from Constantinople, who came to Paris with a flock of about 40 sheep. His was fermenting the sheep milk and the produced yoghurt was served as a food that cured the King. For a short time the King was fully healed. This is the first noticeable evidence of the healing properties of the Bulgarian yogurt.

The beginning of extensive research on the role of the Bulgarian yoghurt, as a product having unique nutritional, dietary and medicinal properties was made with the discovery of Dr. Stamen Grigorov and the theory of Ilya Mechnikov on the relationship between the increased life expectancy of the Bulgarians and the consumption of yogurt. The conducted subsequent hundreds of studies confirmed the health benefits of yoghurt consumption. It was found that Lactobacillus bulgaricus possesses strong antimicrobial effect and the ability to form colonies in the human intestines. The same bacterium produces an antimicrobial factor (antibiotic-like substance) known as “Bulgarikan”. Other developments have been devoted to the effects of the yogurt’s microflora on cholesterol. It was ascertained that eating yogurt reduces the amount of cholesterol.

In 1952 Dr. I. Bogdanov and his collaborators found that the strain Lactobacillus bulgaricus described under number 51, isolated from the Bulgarian yoghurt has antitumor activity. Several studies of other researchers confirmed that the Bulgarian yoghurt has antagonistic action of Mycobacterium tuberculosis, shows antagonistic effect against Salmonella sp. Pseudomonas, Escherichia and others. (quotation of prof. H. Chomakov). Studies show that the uniqueness of the Bulgarian yoghurt lies in its microflora (Starter Culture) and depends on the strain type of Lactobacillus delbrueckii subsp.bulgaricus and Streptococcus thermophilus, which are included in the content of the starter culture, rather than the milk type (sheep, goat , buffalo, cow or mixed). 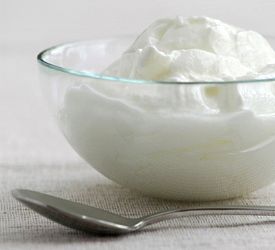 In 1963, at the “Milk Processing” Department was established the Central Laboratory for Experimental Production of Pure Cultures (Starter Cultures) at City of Sofia, with the goal to organize the production and supply of starters for the dairy processing plants in Bulgaria. In the period 1968-1970 from different Bulgarian households producing yoghurt thought the country were created the first 7 symbiotic starter cultures providing standardized production of the original Bulgarian yoghurt. The method of their obtaining is patented in 16 countries worldwide. Some of these starters such as 5-12, 144-12; 37-18 are still available for production of the Bulgarian yoghurt at the State Enterprise “LB Bulgaricum” PLc.

For the past few years the studies conducted in Bulgaria on the Bulgarian yogurt starter cultures isolated from natural sources entered a new stage of development. “LB Bulgaricum” PLc has one of the richest collections of lactic acid strains in the world, over 800 ofLactobacillus delbrueckii subsp. Bulgaricus and Streptococcus thermophilus. With the aid of JICA program, funded by the Japanese government and experts from Meiji Milk – Japan, the Research Center of “LB Bulgaricum” PLc was supplied with modern devices for introduction of modern molecular genetic methods and analytical techniques aiding in the extensive research on the strains ofLactobacillus delbrueckii subsp.bulgaricus and Streptococcus tihermophilus, in order to be ensured consistency of the properties of the produced starter cultures. The methods based on species-specific protein composition of the cell such as (gel-electrophoresis of total cell proteins, SDS-PAGE), as well as features of its genome (restrictive polymorphism of the ribosomal genes, ARDRA; amplification of species-specific sections of the genome, PCR), enabled us to achieve a reliable identification of the cultures stored in LBB collection of starter cultures. With the aid of pulse electrophoresis (PFGE), revealing the individual profile of the genome of each strain, we were able to distinguishe several strains of Lactobacillus delbrueckii subsp.bulgaricus and Streptococcus thermophilus. For the first time at “LB Bulgaricum” PLc has been evaluated the genetic diversity of strains of Lactobacillus delbrueckii subsp.buigaricus and Streptococcus thermophilus isolated from homemade yogurt and plants from different regions of the country, which confirmed the rich variety of strains in Bulgaria.

The Research Center at “LB Bulgaricum” PLc is conducting research on immune-stimulating effect of strains of the starter cultures. An in vitro model for assessing this property was developed based on the induction of the respective strains of cytokine expression in human cell lines. By analyzing the type and amount of induced cytokines (signal peptides) it is defined the immune stimulating potential and the strain can now be used for production of Bulgarian yoghurt with significant immune stimulating effect. With the help of modern technical means is examined the ability of Lactobacillus delbrueckii subsp.bulgaricus and Streptococcus thermophilus to lower cholesterol, and to release bioactive peptides with effects against high blood pressure and peptides improving the utilization of calcium from food thus strengthening the bone density.

The qualities of this ancient lactic acid product – Bulgarian yoghurt, created over the centuries by our ancestors are still to be reveal.