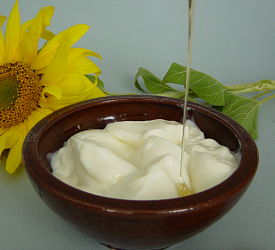 Yoghurt contained microorganisms interact with stomach flora, attacking and neutralizing harmful bacteria which cause aging. This discovery was made still in 1908 by the Russian scientist – the Nobel Prize winner, Ilya Mechnikov. He compared data about life duration in 36 countries and discovered that Bulgarians live the longest. Mechnikov connected this fact with the regular yoghurt consumption. The Russian academician theory, which till nowadays is largely supported by scientist states that aging is due to accumulation of poisonous substances in the organisms and the action of the putrefactious bacteria in the large intestines. With the ages they cause a slow poisoning and disorder of the nervous system.

When there is a shortage of Calcium in human organism, bone substance is rarefied and the risk for fractures increases even from insignificant traumas. This disease is called osteoporosis and is more commonly met with women. It is important to control the quantity of Calcium intake during the whole life and especially in childhood.

Prophylactic action of yoghurt for prevention of some types of tumors is proven in various researches. It is proved experimentally that lactic acid bacteria decrease cancerogenic substances and enzymes in the rectum which shows that they have the potential to prevent organism from cancer formation.

Its curative effect on gastric problems was discovered still in the 16th century, when according to historians, this product known on our lands only, was transferred to Western Europe. In the book of prof. Christo Chomakov “Bulgarian yoghurt – health and longevity” it is told how a healer managed to heal the constant stomach complaints of the French king Francois the First by including yoghurt in his diet. Probiotics are useful bacteria that inhabit intestines and help digestion, at the same time inhibiting development of pathogenic microorganisms. Yoghurt has a purifying effect, it helps with gastro-intestinal disorders, decreases the risk of intestinal infections. Helps maintenance of intestinal balance when it is destroyed as a result of prolonged intake of antibiotics or irradiation. Yoghurt is of positive effect with constipation and several types of diarrhea, especially with small children. Lactic acid bacteria improve digestion as a whole, stimulate intestinal peristaltics and decrease constipation.

Viable lactic bacteria which are contained in yoghurt are powerful arms to support the immune defensive barrier of intestines. Some products which are formed from lactic acid bacteria (bacterocines and lactic acid) also suppress growth of harmful diseases causing microorganisms. Yoghurt helps lowering of high temperature. It decreases also allergic reactions in cases of over sensitivity towards milk and influences beneficially allergic diseases.

Lactic acid bacteria have an anti sclerosis effect since they possess the property of lowering the serum cholesterol. In the processes of fermentation caused by lactic acid bacteria, from the fresh milk proteins are formed bioactive peptides, about which it is established, that they lower blood pressure and decrease the risk from blood clots. Calcium, in which milk and dairy products are exclusively rich, also decreases blood pressure. For people who have already developed cardiac diseases it is recommended to consume low fat milks and white brined cheese which contain substantially less fats (19 g per 100 g product) than yellow cheese which is of 30 to 60% fat content.

Fresh milk is of alkaline reaction and neutralizes the acids obtained from fermentation of sugar in the teeth which destroy teeth enamel. Lactic acid bacteria in yoghurt on their part suppress development of the microorganisms in the mouth cavity. Cheeses act protectively due to the high content of Calcium, protein and Phosphorus.

Neutralizes toxic substances obtained from the processes of kidneys and liver detoxication.

They are an indispensable source of high quality protein – containing important amino acids as Calcium and a basic source of Vitamins B2 and A. When to human organism not enough quantity of proteins is supplied, the so called protein malnutrition is obtained. It leads to a decrease of the organisms’ immune protective force, increases the risk of infections and leads to a loss of muscular and bone mass. Fresh milk and yoghurt, as well as white brined cheese are undeservedly avoided by people aiming at weight loss. In 100 g of cow’s milk are contained about 66 kcal. Furthermore the advantage of dairy products is that they are offered both in whole and skimmed form.

They are consumed in a natural state or as part or addition to various dishes, salads, desserts and dough products. Yoghurt is a special reason for national pride, since it is considered that its motherland is in our lands still from the time of the Thracians. Bulgaria has given to the world the lactic acid bacterium – Lactobacillus Bulgaricus –its discovery for science and the industrial technology for yoghurt production.